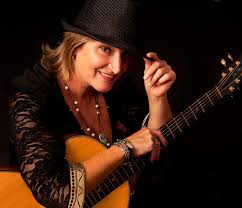 Born in Alabama, the deep south of the US, and cradled to the sounds of delta blues, gospel and country, Beverly Jo decided at a young age to travel across her native America.
The winding turbulent paths of her life finally led her to Europe, where the rainy but tender hearted country of Belgium became a refuge for her.  First playing in the streets, then in bars and clubs, her reputation for having a voice of rare sensuality and warmth quickly helped her move on to become one of the most sought after professional vocalists in the old world.

She worked with such talents as, The Sparks, Elliott Murphy, Ricky Byrd, Deep Forest, Niagara, Alain Chamfort, Souchon, The Scabs, Arno, Maurane, Zap Mama, Matmatah, Stoppok, Francis Cabrel, Eddie Mitchel and Paul Personne.
Along with her producer and acolyte Michel Gudanski she created and recorded the celebrated duo with Arno “Jean Balthazaarrr “ that hit the charts in France and remains a classic favorite of the French public and media today.

Parallel to this she always kept up her personal career, recording for herself and touring almost non-stop with her band since 1991.

Beverly Jo is also a singer/songwriter of exceptional talent. Not only for herself, but for other artists as well. She has collaborated and co-written with Deep Forest (Grammy award for World Music) Stoppok of Germany,  as well as Belgium’s Stan Van Samang (platinum cd Welcome Home, and new cd King in my Head) The Blackbox Revelation (NME’s young discovery in the UK) ascending rock group TriggerFinger … just to name a few.

She has been chosen to coach and judge in the Belgian version of The Voice and has remained a favored guest in numerous radio and television programs in Europe and the Southern USA.

Be it a solo performance, semi acoustic or flaming rock show, here is an artist that can cover it all with ease and experience.

The “eternal vagabond” with the whirlwind voice hasn’t stopped traveling the world nor amazing her public.  Rock has a heart and a soul in the persona of Beverly Jo Scott.

Her first 2 cd’s « Honey and Hurricanes » and « Mudcakes » being released by Sony/Columbia, then a live recording « The Wailing Trail » on the same label, later moving on to do several studio cd’s on independent labels, as well as 3 live recordings, notably the superb « Cut & Run » as well as an autobiographical DVD.
2005: Beverly Jo created a special tribute to Janis Joplin called “PLANET JANIS”.
2008: Release of DIX VAGUES, her first all French CD. A subtle mix of her soul and Southern roots with her adopted European culture.

2009: Beverly Jo creates the super show “Woodstock Magic Tour” to commemorate the 40th anniversary of the mythical festival. 13 artists on stage with giant screen, décor, costumes and  video creations… performed in mega events for tens of thousands of spectators.

2010: Release of “Planet Janis Live” cd followed by a concert tour across France, Belgium and Luxembourg.
2011: Creation of the new “almost one woman show”, SWAMP CABARET with  new songs, visuals and virtual performances with some of Beverly Jo’s musician friends from her Alabama homeland. B.J. takes on the task of being a one woman band, playing percussion with her feet and even doing her own backing vocals…

2012: Scheduled recording and release of a new cd for the Swamp Cabaret tour..