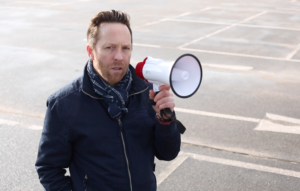 In twenty years of career, Perry Rose has pulled off the perfect fusion between Anglo-Saxon pop and the Irish traditional music that fits this redhead’s freckled skin like a glove. A whole universe of simple, beautiful songs, luminous ballads and catchy Irish melodies.

What you see is what you get

With Perry, what you see is what you get. The songs are direct, almost spontaneous. The delivery is sincere, immediate and often fun – even more so on stage. In the past 20-odd years he has played every format: from solo to duos with a string of violinists, acoustic or rock trios, full rock bands, full traditional band and concerts with a choir of 20 children. If that sounds like a lot, it’s not; it’s how you fill your time when you have musical curiosity and spend 20 years on stage. Well, that’s how Perry sees it anyway. If you look at his contemporaries, there are not all that many that have had an audience follow them for 20 years.

February 1991, release of the first 6-track album, “Because of You”. The single “Green Bus” receives an incredible response from the radios in Belgium, Holland and Switzerland – for over six months!

February 1992, The second album “All Seasons” appears on the J’M2 label, distributed by Sony. Re-released, the single “Green Bus” meets with new enthusiasm. Since then, the singles “Why Should I Worry”, “Winter Baby”, “So Sorry”, “Gospel Truth” and “The Best” have become favorites for his audience.

September 1994, his third album, “The Bright Ring of the Day”, is produced and recorded in England by Kevin Jamieson and Nick Hannan, with a host of guests that include Sundays’ drummer, Aztec Camera’s bassist and Peter Gabriel’s cellist. The many references to his Irish roots, combined with an original choice of instruments and sounds, appeal to both the press and the public. Released in many European countries and in Asia (South Korea and Hong Kong). “Round and Round” becomes a classic for the audience.

Late 1996, “Green Bus” is released, featuring 10 singles that marked his career, six tracks of the mini-album “Because of You” (now a collectors’ item) and eight new tracks.

March 1998, “The Triumphant March of the Lonesome Goldfish”, his most mature album so far, is released with a brand new band, The High Wires. The new single is “Lords and Thieves”.

April 1999, “Celtic Circus”, released by the Breton label L’Oz Production, is a compilation of the most “Irish” songs, including the previously unreleased “Celtic Circus”.

At the end of 2001 Perry recorded his new album “Hocus Pocus” in Belgium, Brittany and Ireland. He made the album with Irish producers Graham Murphy and Chris O’Brien. It came out mid April 2002 in France, Switzerland and Belgium, on the L’Oz Production label

Two years on (2004), Perry records his first live album Happy live before an enthusiastic public at the venerable Brussels venue l’Ancienne Belgique. Along with a DVD of clips, concert snaps and photo gallery, the album features Perry’s biggest hits, plus a new title: The Butterfly Song (Next to Me). With the album Happy Live (2004), recorded in public, Perry Rose gives a magnificent demonstration of his consummate ease on stage. The album also proves beyond the shadow of a doubt (if proof were needed) that his voice is up there with the greats.

Between recording and touring on his own, Perry Rose had his hands full with a host of other musical projects (Urban Trad, Didier Laloy, Les Déménageurs, Les Jeunesses Musicales, the Solo Tour etc.).

With his CD ‘Wonderful’ in 2012 and an EP ‘Splendid’ in 2014 released in Belgium, Holland and France, he perpetuates the playful and positive spirit that so endears him to his public.

He is also well-known also well known for his participation in five successful shows for young audiences (the latest creation “La Petite aventure” in 2018). He also created “Pic Nic rendez-vous”, a show for children from 3 to 8 years and he works regularly with Isapo.

Ten albums and EP released in several European and Asian countries and more than 500 gigs have brought Perry an enthusiastic audience that is highly appreciative of his music.